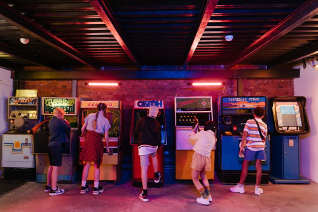 In today’s age of digital gaming and technology, you can play just about anything on your phone, tablet, computer, or gaming console – no need for arcades. But before you start playing Mario Kart on your Wii U, let’s take a trip down memory lane to the best classic arcade games in the history of video games.

It’s hard to find someone who hasn’t heard of Pac-Man or the equally popular spinoff Ms. Pac-Man. Namco’s classic 1980s game features the notorious Pac-Man himself, floating along the intricate neon maze, devouring multiple dots in his path.

Once those dots start blinking, known as power pellets, it’s go time for Pac-Man – those ghosts are going down. This simple but satisfying game has earned its reputation as a classic.

Another notorious game, Space Invaders, was released in 1978 by the company Taito. It’s no surprise Space Invaders looks similar to Star Wars, which was hugely popular at the time. This iconic game took to the shoot-em-up style in such a simplistic way, making it one of the most popular and profitable arcade games in history.

The original 1987 classic is the most notable fighting game of all time. Street Fighter, developed by Capcom, was the first of its kind to implement command-based techniques and a six-button control.

Due to its growing popularity, this classic arcade game became customary for arcades back in the day. Reaching worldwide attention, Capcom grew the Street Fighter series soon after with Street Fighter II in 1992.

Besides Street Fighter II released in 1992, Mortal Combat was on the arcade scene at the same time. It took flight as one of the most influential arcade games of all time. Not only did Midway, the creators of Mortal Combat, produce the second game in its series one year later, it also got a movie adaptation in 1995. It became notorious when critics complained of the graphic nature of gore and extreme violence in the game, resulting in the creation of the Entertainment Software Rating Board (ESRB).

Another Midway creation was Terminator 2: Judgement Day. That’s right – the world-renowned movie got its very own game spinoff. Though notorious for being part of the Terminator franchise, its aim was horrific, making it nearly impossible to move to the next stage. But at least the killer Guns N’ Roses soundtrack made its gameplay less annoying.

At Stars & Strikes Getaway-n-Play, there’s a classic arcade game for everyone! From classic arcade games, pool tables, and more, you’re bound to have fun with the whole family. If you’re looking for an arcade-themed birthday party, you’ve come to the right place. Give us a call today or visit one of our arcades throughout Alabama, Georgia, North Carolina, South Carolina, and Tennessee.