Did You Know that Super Mario Started Out As an Arcade Game? Here’s 5 Other Game Favorites That Started in an Arcade 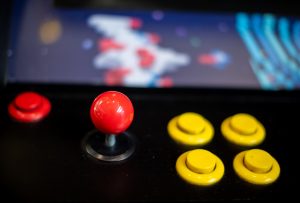 Whether it’s playing Pac-Man at the local arcade, or trying to get a high score on Donkey Kong, there’s just something about these games that keep us coming back for more. In this blog post, we’re going to take a look at some of our favorite arcade games and how they made the transition to our home consoles. So put on your nostalgia goggles and let’s get started!

One of the earliest and most iconic arcade games is Tetris. This puzzle game was released in 1984 and quickly became a hit with gamers of all ages. The goal of the game is to rotate and place tetrominoes (shapes) in order to create complete rows, which then disappear.

The game ends when the player can no longer place any more tetrominoes on the screen. While Tetris was originally created for arcade machines, it has since been ported to almost every gaming platform imaginable, including phones, computers, and even calculators!

Donkey Kong is yet another arcade game that has stood the test of time. This platformer was released in 1981 and features everyone’s favorite ape, Donkey Kong. In the game, players control Mario as he tries to rescue Pauline from Donkey Kong’s clutches.

The game is split into four different stages, each with its own unique challenges. Donkey Kong was so popular that it spawned an entire franchise, including sequels, spin-offs, and even a TV show.

Teenage Mutant Ninja Turtles is a side-scrolling arcade game that was released in 1989. The game is based on the popular cartoon series of the same name, and tasks the player with controlling one of the four turtles – Leonardo, Michelangelo, Donatello, and Raphael – as they fight their way through waves of enemies. The game was so successful that it was later ported to multiple home consoles, including the NES and Sega Genesis.

Contra is a run-and-gun arcade game that was released in 1987. The game is set in the future where players control soldiers who must battle their way through hordes of enemy soldiers and giant aliens. Contra is known for its arcade-style gameplay and over-the-top violence. The game was so popular that it spawned numerous sequels and even inspired a movie.

Soul Calibur is a weapons-based arcade game that was released in 1998. The game is set in a medieval world where players control warriors who use various weapons to battle their way to victory. Soul Calibur is known for its unique gameplay and beautiful graphics. The game was so popular that it spawned an entire franchise, including sequels, spin-offs, and even a movie.

Game More at Stars and Strikes

At Stars and Strikes, we have proudly curated the world’s best arcade games. With our top-of-the-line arcade setup, bowling lanes, and even a full bar, Stars and Strikes is the perfect place to host your next party or event. Contact us today to learn more about how we can make your party a triumph!