What Are Some of the Best Arcade Games of All Time? 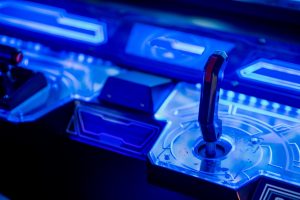 Now this is a tough question. With so much variety in the arcade game genre, it’s seemingly impossible to pinpoint the best arcade game of all time. What we can do is take a look at some of the best-selling, most profitable, and most popular arcade games in history. Here are our top 10 picks:

Everyone knows this classic maze game! Launched by Namco in 1980, Pac-Man was an instant hit and remains one of the best-selling video games of all time. In this game, your goal is to help Pac-Man travel through a ghost-filled maze, all while eating as many dots as possible.

We predict this timeless masterpiece will remain in arcades for years to come, and it’s sure to make its way into your next arcade date night.

Space Invaders was released by Taito in 1978 and it became one of the most popular arcade games of all time. Your goal is to destroy rows of aliens before they can reach you and eliminate your base. The game was so successful, it became a pop culture phenomenon and spawned several sequels. In fact, it was so popular that it even became a movie.

As part of the Super Mario world, Donkey Kong was released by Nintendo in 1981, and it remains one of the best-selling games of all time. The goal in this game is to guide Mario through a series of platforms while dodging obstacles and collecting items.

Street Fighter II was released by Capcom in 1991 and quickly became one of the best arcade games ever made, if we do say so ourselves. This fighting game featured exciting battles between different martial arts fighters. Despite the game’s age, it’s still incredibly popular and has spawned several sequels and spin-offs.

A classic: asteroids was released by Atari in 1979 and became a smash hit. Your goal is to destroy asteroids before they hit your ship and eliminate all the aliens roaming around in the game.

Frogger was released by Sega in 1981, and made its impact for years to come. In this game, your goal is to help a frog cross dangerous roads and rivers safely, dodging objects along the way.

This classic game was released by Atari in 1980, and your goal is to protect your base from a centipede as it travels around the screen to attack you by shooting the different segments of the centipede.

Although it sounds pretty gross, it can be a lot of fun!

Galaga was released by Namco in 1981. In this game, you use a spaceship to destroy waves of aliens as they travel down the screen in an attempt to attack you.

Missile Command was released by Atari in 1980 and it remains a classic, one of the best-selling arcade games ever made. In this game, your goal is to defend cities from an onslaught of missiles using a missile defense system.

Q*bert was released by Gottlieb in 1982. This classic puzzler involved guiding a character named Q*bert around a pyramid while avoiding a variety of enemies.

These are some of the best arcade games ever made, tried and true by all who have enjoyed these incredibly successful games over the years. Whether you’re looking for mindless fun or deep strategy, these games are sure to provide hours of entertainment. So grab your quarters and head to the nearest arcade to try out these classic titles!

Try These Games and Others at Stars and Strikes

Come to the best arcade in town: Stars and Strikes! Here, you can play all of the most popular, most profitable, and best arcade games that have been discussed today. Visit us at your nearest location for a real blast from the past!